A meeting place for rose breeders.

How Does Height Work Genetically?

How Does Height Work Genetically?

I've been loathe to acquire any minis, as I'm a fan of bigger bushes. However, some minis have unusual colors and traits that I just haven't seen in regular-sized plants. When breeding with miniatures, is it easy to reacquire tall stature in offspring? Any papers on the subject, or firsthand experience, would be appreciated.
Top

Look at the back ground for Scentimental. The stripes came from Ferdinand Pichard through minis. The two red underlined roses are the minis in its back ground. It's full sized.

Lynnie, which can easily grow over 5' X 5' is half mini (Torch of Liberty) X Basye's Legacy. This Hugonis hybrid is large sized and a first generation mini cross. https://www.helpmefind.com/rose/l.php?l=2.73883.0 Striped Lynnie is the result of two minis and is full sized. https://www.helpmefind.com/gardening/l.php?l=2.73788 Fertile triploids play large parts. Perhaps it might behoove you to include them in your mix?
Kim
California Central Coast
USDA Zone 9b
Sunset Zone 15
Cooler inland coastal valley with strong marine influence
Top

[quote=jwdykes post_id=73225 time=1628960902 user_id=2326]
I've been loathe to acquire any minis, as I'm a fan of bigger bushes. However, some minis have unusual colors and traits that I just haven't seen in regular-sized plants. When breeding with miniatures, is it easy to reacquire tall stature in offspring? Any papers on the subject, or firsthand experience, would be appreciated.
[/quote]

This is a fairly complex question. Height is affected by many genetic traits.

Miniaturism. Gigantism. Semi-dwarfism. Dwarfism. Terminating and non-terminating growth. Vigor. Ploidy. Deleterious alleles. And some other various factors. Most of which compounds or conflicts with one another.

It is easy to acquire very tall, non-climbing miniatures, and they are almost never desired.
Top

Yes, you can raise undesirable tall minis, and you can also, easily raise cathedral eating monsters which never flower, not using them. Minis have provided 'bridges' between what we wanted and what we couldn't do without them. Without minis, would we have the mossing, stripes, Hulthemia blotches so easily raised from breeding we have today? All of which came directly from Ralph Moore's work and all of it through miniatures.
Kim
California Central Coast
USDA Zone 9b
Sunset Zone 15
Cooler inland coastal valley with strong marine influence
Top

A fascinating "bridge", leading apparently to several different directions. It will be interesting to see where else it leads.
Duane
Top

Ralph Moore (1967) gave a couple of useful bits of insight into the origin of Minis.


I have shown that miniatures can be, and have been, produced from the seedlings of certain varieties, such as Old Blush, and also from crosses of dissimilar kinds as with my crosses of Rosa wichuraiana x Goldilocks, etc. Yet another way could be by sports (or mutations). I have not observed this, but there is one variety listed in Modern Roses VI which is claimed to have so originated. Baby Peace (Plant Patent 2201) is claimed by its discoverers to be a sport of Peace rose with a small one-half to one inch double flower, 50-55 petals, ivory-yellow tipped pink.

This brings up yet another often observed phenomenon known as witches'-broom. These dwarf, multibranched growths which occur quite often on conifers and other plants are an abnormal growth formation which may occur almost anywhere on a branch or tree. A number of dwarf ornamental conifers have been propagated originally from such brooms.

Dwarf strains of corn (maize) usually lose the ability to make or respond to one or more of the gibberellins. On the other hand, come "witches' brooms' result from excess cytokinins produced by a fungus.

This sort of disruption is apparently not uncommon in 2nd or later generations of interspecific hybrids, but practical breeders seem to be inclined to focus on what they want, rather than fascinating "freaks".

For example, Burbank's 'Paradox' walnut was the product of Persian walnut (Juglans regia) pollinated by the northern California walnut (J. Hindsii). The hybrids grew remarkably fast. Some of the F2 offspring grew as fast, some even faster, but others ...
"In the same row, as already intimated, there will be bush-like walnuts from six to eighteen inches in height side by side with trees that have shot up to eighteen or twenty feet; all of the same age and grown from seeds gathered from a single tree. This rate of growth continues throughout life, and the fraternity of dwarfs and giants has been a puzzle to layman and botanist alike."

If you have burning desire to raise bonsai walnut trees, here is one way to do it. But most folks want neither Mini walnut trees, nor "those that trail their limbs along the ground like a gourd or squash."

Simply stated, even species that are fairly closely related may have their genes arranged differently. It may be that one or more genes associated with cytokinins are found on chromosome 1 in one species, but on chromosome 2 of another. Thus, in second generation offspring some seedlings will get an extra copy, while others get short-changed.

C. C. Hurst concluded from his meticulous examination that 'Old Blush' is of hybrid origin. This was a problem for breeders in England, who generally found the Blush Tea-scented to be a more reliable parent.

And crosses of R. wichuraiana and Goldilocks or Floradora are are just as likely to give such interesting results ... if the breeder is paying attention.
Top

I forgot to mention that chromosome loss can occur as root sports. Risley (1959) wrote:

The number of chromosomes in the cells of one plant are supposed to be constant, and almost always are so. The full compliment of 21 chromosomes of the triploid offspring of Skinner's Rambler x Yellow Pinocchio are shown in Figure 11. All 21 were not always present in the root-tip cells. Only 33% contained all 21, while the remainder had 20, 19, 18 and 17 chromosomes per cell. This rose should produce an occasional mutation or sport from a bud if this condition of variable chromosomes number exists in all the tissues of the plant.

Once I get on a scent, I keep going.
'Rose de Meaux' may have originated as a root sport from the typical Rosa Centifolia. Such events are apparently more common than random gene mutations.

And here is another case of hybrid vigor in the F1, dwarfism in the F2.

I had just two seed-pods of the above crop (Arabis blepharophylla x A. Soyeri), both of which were one-half larger than the natural seed-pods of A. blepharophylla, the seed-bearer. Though so large, there was only one ripe seed in one pod and seven in the other, of which only four were sound. I had three or four plants only from both. One was a perfect monster. Unlike either parent, the height of the flower-stem being from 3 to 4 inches in the one parent, and not above 6 inches in the other, it sent up a flower-spike 18 inches high, bearing flowers (followed by seed-pods) for more than half its length on the upper portion of the stem—a thing wholly different from either of the species from which it sprung.

May 12.—On looking over a bed of the same second generation of hybrid seedlings this morning, which I had planted apart from the others, I find many of them (forward to flower) of various habits and sizes, one of which, the smallest, I now enclose, No. 4. This tiny thing, not 2 inches in height, has, you will observe, 6 flower-stalks, with large umbels (large for the plant) of flowers at the top, and some having flowers at the axils.

A tiny plant with six flower stalks is not a mere runt.
Top

I've been looking through the offspring lists of a few Minis and finding lots of Minis. That makes sense. Most people who breed with Minis are lookin g for more of the same.

The one time I used a Mini, 'Popcorn', I really had no plan at all. My 'Blush Noisette' never set hips on its own because the stamens are hidden among the petals. But it happily accepted pollen from 'Popcorn'. From seeds of several hips I raised 40+ seedlings. I don't know what happened with most of them. Three grew into climbers. Canes grew about 4 feet before terminating in clusters of white blooms. Not bad, but I gave them to a friend of a friend and have not been in the neighborhood since. There was one with uninteresting pink flowers on an uninteresting bush. Another had pink blooms but was even more forgettable. Then there was a wee thing that had loads of vigor. I liked it enough to cut off the several canes for propagating. But there were 20 other shoots already started. That's vigor!

When I was just a kid, I learned to pull out the weakest plants when I was thinning a row of radishes, lettuce, etc. Small = weak. Or so I thought. OF course, I was not looking for Mini radishes. And that's probably what happened to some of my seedlings. They were small AND weak. These would have been squeezed out by their siblings. Only that one VERY vigorous Mini survived and caught my attention.

And for good measure, I finally got around to uploading an article about dwarf corn. The experiment was designed to test whether gibberellins are responsible for hybrid vigor. Nope! But the experiment itself made it very clear that dwarf corn plants can get loads of hybrid vigor without getting any taller.

In no case do dwarves appear to suffer a decrease in heterotic effect. If anything, there seems to have been a slight increase in the relative advantage of hybrid dwarves over inbred dwarves. This was not expected since the hybrid dwarves grew in the same rows as their normal siblings that crowded and towered over them more than the normal siblings of the dwarf inbreds.

I should have included pictures to show what I was trying to explain.

In effect, my little rose is a Mini Noisette, or Mini Hybrid Musk. I assume it would climb if given some support, but I haven't had it for a long time. Still, it's something to consider if we need a short hedge (3 or 4 feet) that can be cut back rather than tediously pruned.

Another example (not mine) that is worth considering.
Moore's Blue Mist

was used by Dee Bennett as pollen parent with Blue Nile

to give her Ernie, which is like a Mini Floribunda. 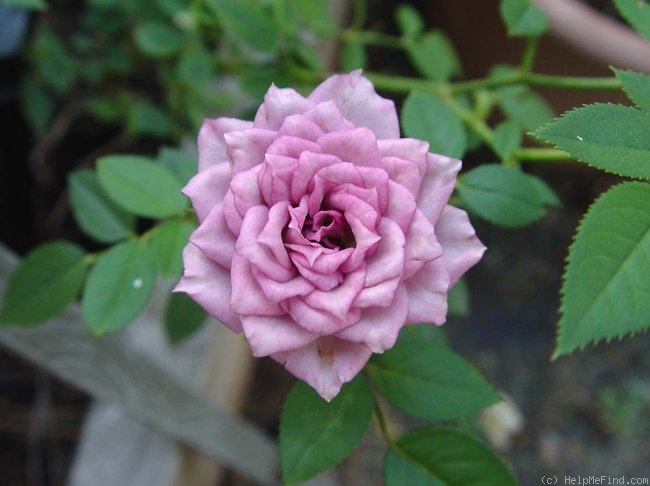 She then used pollen of Ernie on Lagerfeld

which gave her the very beautiful Violet Mist, a Mini HT or Mini Flora..

Wow! Thank you, Karl! These photos are amazing and very informative. Your entry is exactly what I was hoping for. I'm sure they will be inspiring to many hybridizers, beginners and veterans alike.
Top

There is a side example in my brief work with Popcorn.

In another investigation I learned that Rosa multiflora was imported to France at least three times. One of those involved a variant originally designated R. thyrsiflora because of the distinctive form of its clusters.

I have seen this particular form among the thousands of Multiflora specimens that have spread across Tennessee. I didn't get any pictures, though, because I had not yet read about Thyrsiflora. But I did find some examples in my old pictures of Multiflora derivatives.

Popcorn, from the side

The following three are seedlings from Blush Noisette x Popcorn