A meeting place for rose breeders.

So I got R.glauca this year. Many OP hips set, but most aborted, is there self incompatibility at play here? Anyone know?

Also over on HMF there's photo's of it with green hips, mine maintained the purple/brown colour similar to it's canes and the few remaining hips are turning red now, approx 3 months from flowering...so fairly standard time frame, would assume it's safe to harvest the seed? Just being overly cautious as there's only 3 hips remaining.

Thank you.
Anyone able to send rosa californica (op) seeds to me in Australia?
Top

It's possible it could be self-incompatibility is going on there, but if there were other plants in bloom nearby that wouldn’t matter. It may just be your plant isn’t very female fertile. Most species plants from a nursery are going to be grown from seed so there is going to be a lot variablitiy from plant to plant. So maybe try another plant.

I had an R.glauca for a number of years and it set many OP hips - see attached photo. I tried seven or eight different pollens on it and got many seeds. The problem I had was that none of the resulting seedlings showed any influence of the pollen parent. So either the R.glauca totally dominated hybrid or they were self pollinated seedlings. It may also be possible they were unpollinated seeds, which i have read can occur in Caninae species.

Hi!
I just planted R. glauca this year mid-summer. There were 3 intentionally pollinated and 9 OP hips. The picture was taken on August 17th. You can see a few of the hips to the right. I harvested and shelled on October 2nd and planted about a month later. When harvesting, the hips were getting quite juicy. They were a deep carmine red by that time. I had one hip fail that I took note of and I didn't notice the ones that might have failed that I didn't pollinate. However, of the OP hips I collected between 16-32 seeds each. I planted them all, but I have no clue how well they're germinating.
~Sarah

pgeurts wrote:It's possible it could be self-incompatibility is going on there, but if there were other plants in bloom nearby that wouldn’t matter.

There wasn't a lot of overlap if any, it bloomed early (but not as early as Golden Chersonese) there may have been a slight overlap with Lord Penzance towards the end of R.glauca's blooming but most things bloomed later which is why I questioned if R.glauca has self incompatibility, there were a lot of hips originally they just aborted around the 1 month mark.
Anyone able to send rosa californica (op) seeds to me in Australia?
Top 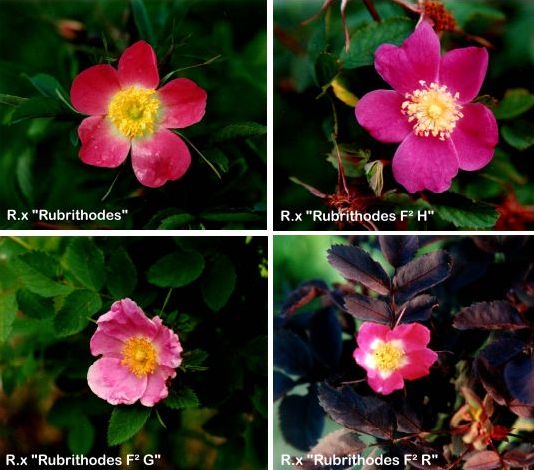 Plazbo,
There is disagreement even on this forum as to whether diploids are self-infertile. There is anecdotal evidence for and against. With R.glauca, your plant appears to be self-infertile where as my plant appeared to have been self-fertile. My suggestion is to freeze some pollen to use on R.glauca next year and see what happens. If you get hip and seed set great, and if you don’t you may have try something else.

10 years ago I raised some R.blanda OP seedlings that sure showed signs of being a cross with R.glauca. They were intermediate in color and form between the two. But I didn’t keep of the seedlings and now I’m kicking myself for not keeping any or making any crosses with them.
Paul Geurts
Zone 4 Minnesota
Top

Getting slightly off-topic... I understand that R. glauca, as a caninae member, favors passing on predominantly its own genes as a seed parent. My interest in the plant would involve maintaining many of glauca's attributes -- notably foliar. My question: in a theoretical cross of (R.glauca x diploid rebloomer) x (R.glauca x diploid rebloomer) what would be the theoretical percentage of reblooming F2 seedlings? I have no understanding of how the genes segregate, and where the gene that determines rebloom would land in this theoretical cross.
Philip F.
Zone 8 / Sunset Zn 30 (Austin, TX -- formerly New Orleans, LA)
Top

I wonder how Glauca's favoring passing on predominantly its own genes might work with a fertile triploid mini? They have finally made it possible to obtain hybrids with Minutifolia and Puzzlement, neither of which had cooperated previously, no matter what mates I tried with them. Jim Sproul's L56-1 behaves like a triploid. Golden Angel, Golden Horizon, Torch of Liberty, Lynnie, even Blue for You are all triploids which have demonstrated themselves to be extremely fertile. Wouldn't it be interesting seeing what a one-third to two-third Glauca mating might produce?
Kim
California Central Coast
USDA Zone 9b
Sunset Zone 15
Cooler inland coastal valley with strong marine influence
Top

Phillip,
My feeling is that the percentage of repeat bloom in F2 seedlings in the cross you propose would be 0%. The reason being is because in the unbalanced meiosis of R.glauca there are two sets of chromosomes called univalent that do not pair up and are only passed along in the egg. While it has been reported that this type of meiosis starts to break down when pollen from a non caninae parent is used (i.e. the repeat bloom diploid in your cross), it is only a partial breakdown and not all of the univalent pair up. These univalent would still be passed along in the egg and this means there would still would be non-repeat genes in the seedling. Since repeat bloom is recessive this would mean the seedling would not repeat bloom. That is just my understanding of it and I could be wrong, because nature has a way of doing what it wants.